Part 4: What Can We Learn from the Tsunami？

The east side of Fukushima Prefecture faces the Pacific Ocean, and the coastline is approximately 166 km long. The series of tsunamis triggered by the Great East Japan Earthquake inundated 112 square kilometers, or 5% of the area of the coastal municipalities in Fukushima Prefecture.

The ocean, which brings us so many blessings, has shown us the threatening side of nature. The tsunami that destroyed all the power sources of the nuclear power plants and caused the long-lasting accident in Fukushima was over 15 meters high, almost three times higher than expected.

As we are now being urged to strengthen our countermeasures against natural disasters and conserve natural resources, there are many lessons to be learned from this disaster. 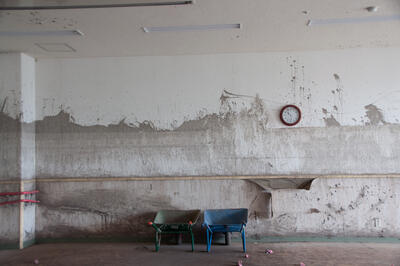 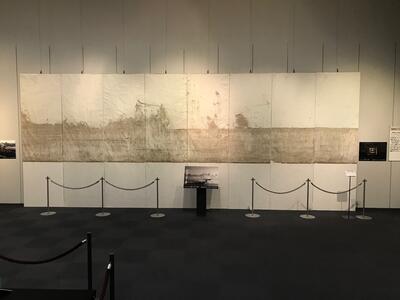 Wallpaper with reinforced backing reproducing the height of the tsunami traces
Minamisoma collected on September 17, 2012

“Yossi Land" is a nursing home located about 2km inland from the coast in Haramachi Ward, Minamisoma City. At the time of the disaster, there were about 140 patients and 60 staff members in the building. Even though this location was not included in the tsunami hazard area on the city's hazard map at the time, it was hit by the tsunami and 37 people were killed. The interior walls of the building were covered with traces of the tsunami that were over two meters high.

The building was demolished the following year and moved to a different location. The curator of the Fukushima Museum went to the site and photographed all the walls. The wallpaper was removed and preserved, and the back of the walls were reinforced with paper and boards so that the traces of the tsunami could be reproduced at their actual height. The traces of the tsunami convey to us its power with more reality than photos or videos. 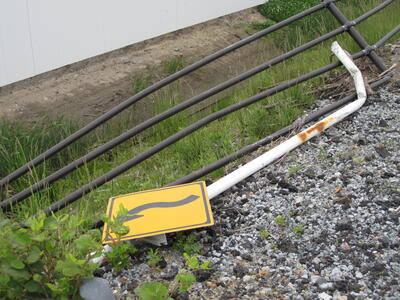 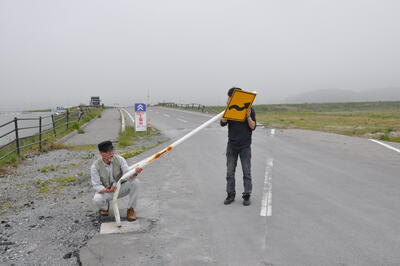 Verification of the broken part of the road sign
Minamisoma May 26, 2014 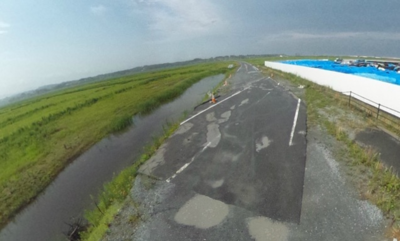 A road sign indicating a "curve ahead" had fallen on the side of the road on Prefectural Road 391, which runs near the coast in Odaka Ward, Minamisoma City. By matching the cracks in the base post left by the roadway with those in the sign, we found that the sign, made of aluminum alloy plate and galvanized steel pipe, had been bent by the force of waves coming in from the sea toward the land, and then folded by the receding tsunami wave. 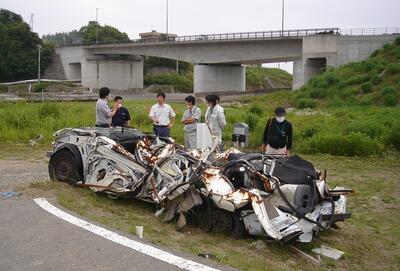 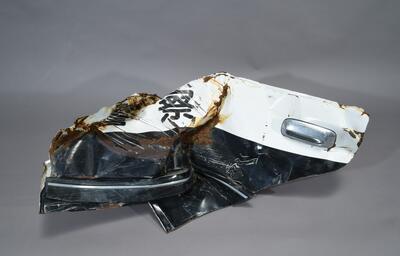 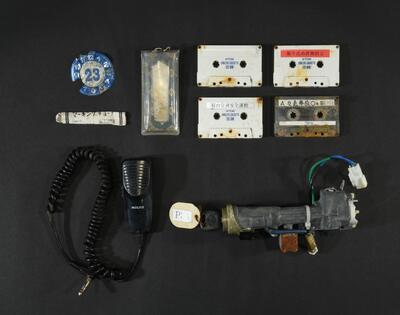 Immediately after the earthquake, two police officers from Futaba Police Station, located in Tomioka Town, rushed to the coastal area in a patrol car, Futaba No. 31, to guide residents to evacuate. The police car was then hit by the tsunami and was found near a bridge at the mouth of the Tomioka River with a large amount of earth and sand flowing into the car. The body of one of the police officers was found at sea about a month after the tsunami, while the other remains missing.

Deployed to Futaba Police Station in 2003, this Toyota Crown patrol car was involved in many duties to keep residents and the community safe. Inside the car, there were tools used in daily operations such as chalk for drawing white lines and cassette tapes of traffic safety campaigns, as well as microphones used to call for evacuation. The key was still plugged into the car's ignition.

In 2015, the main body of this police car was moved to a park next to the Futaba Police Station. In front of the police car, flowers were continually offered in memory of the police officers who sacrificed themselves to save the residents. This police car is now on display at the Tomioka Archive Museum, which has opened in 2021. 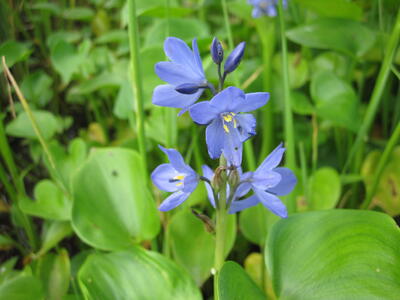 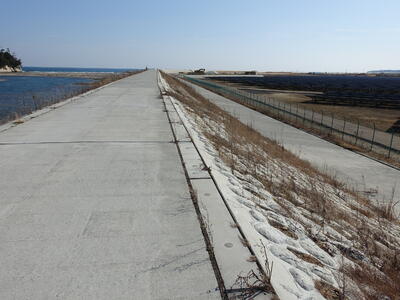 Solar panels were installed after the construction of the seawall in Shimoshibusa area
Minamisoma February 15, 2019 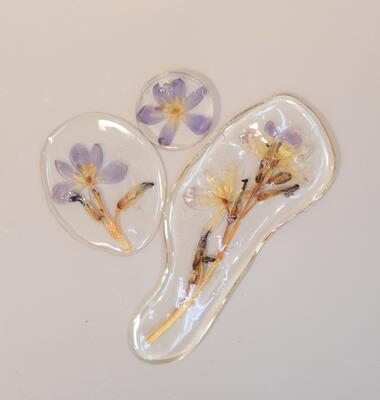 Coastal areas inundated by the tsunami returned to their former landscape before land reclamation, and in some places, the water did not recede for a long time. In these places, one of the plants that can be seen again is the beautiful blue flowering Mizuaoi (Monochoria korsakowii).

The Mizuaoi is an aquatic plant that grows on the margins of rivers and reservoirs and blooms from August to October, and was once a common plant in coastal alluvial areas. However, due to river improvement works and the use of pesticides, they gradually disappeared, and in 2002, the Red List issued by Fukushima Prefecture designated them as "Endangered II", meaning "a species with an increased risk of extinction".

As the soil was disturbed by the tsunami and the wetlands area expanded, the Mizuaoi woke up again, and for a while, colonies of this plant could be seen in many places. Their lovely appearance after the tsunami seemed to be a symbol of revival. The Disaster Heritage Preservation Project, for which the Fukushima Museum served as the secretariat, paid attention to this Mizuaoi and held a study session and field trip in 2016 as an outreach project to learn about the changes in the natural environment after the earthquake.

However, due to the subsequent reconstruction and embankment construction work, it has become difficult to see the Mizuaoi again. In the 2020 edition of Fukushima Prefecture's Red List, the Mizuaoi is still listed as "Endangered II". The momentary appearance and disappearance of the Mizuaoi colony raises many questions about the natural environment and human activities.